The world's most popular soccer⚽ manager mobile game, "Soccer Master" is an immersive soccer manager👨‍💼 simulation development mobile game. You will build a world-class soccer dream team step by step by discovering stars, cultivating players, and participating in leagues around the world.🥇
Download APK
0/5 No votes
Report
Developer
Firephoenix StudiosUpdated
Jul 13, 2022Version
Varies with deviceRequirements
Varies with deviceGet it on 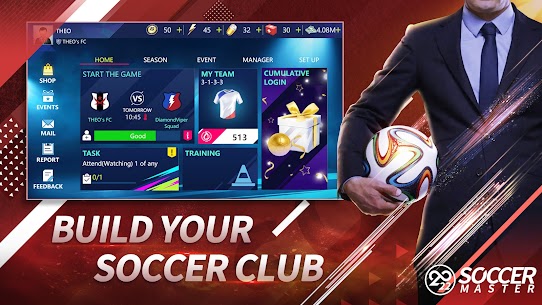 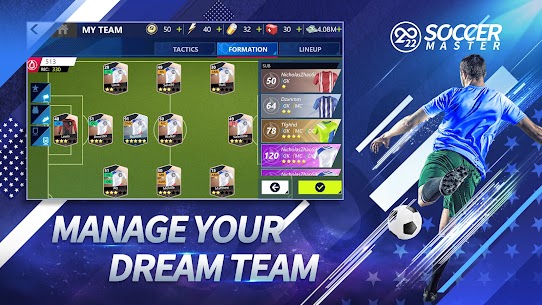 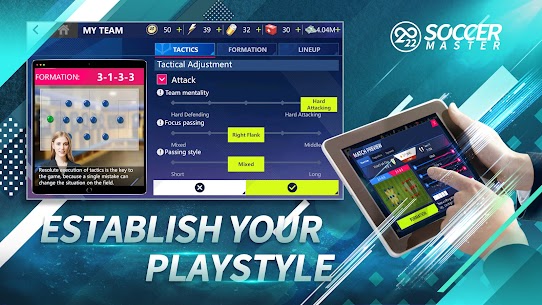 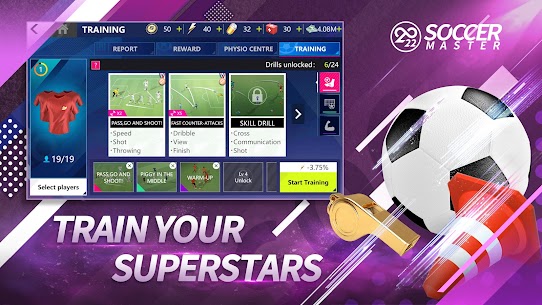 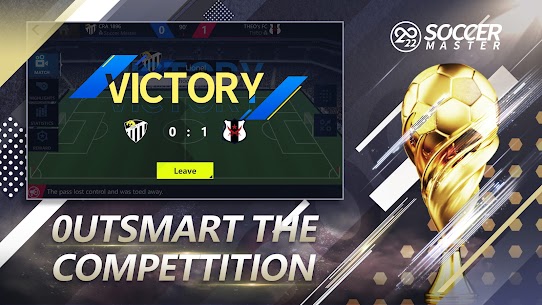 Soccer Master – Football Games – football club manager simulator. The fact is that the game combines Chinese and English localization, because of this, you have to guess up to many interface elements yourself. There are many countries in the game, but without licensed players; the developers have not even added models for football players. Instead, we get players’ T-shirts in the main menu, and during matches we watch the ball icon flying from one side to the other.

The world’s most popular soccer manager mobile game, “Soccer Master” is an immersive soccer manager simulation development mobile game. You will build a world-class soccer dream team step by step by discovering stars, cultivating players, and participating in leagues around the world.
Recruit soccer players to form a team in the game, starting from the 1st league and continuing to advance until you win the soccer Champions League trophy. As the head of the club, you can control the club from all aspects of upgrading player stats, recruiting staff, updating soccer club facilities, managing transfers, setting team tactics and more.

This is your chance to make a name for yourself in soccer history! Let soccer clubs make their mark from day 1. From building pitches to picking squads for matchdays, “Soccer Master” has it all! Win the hearts and minds of your fans and create a soccer team that can win soccer fantasy trophies every season!

Take your soccer management art to the next level by joining the thrilling hit soccer game “Soccer Master” for an exciting real soccer team building experience.

Real soccer simulation business⚖, control the transfer market, sell and buy players.
A large number of characteristic legendary soccer star skills, multiple soccer head coaches and soccer assistant coaches to help you enrich the soccer tactical system.
Set up winning formations in everyday soccer matches! Manage clubs in real-time PVP matches.
Carefully selected training soccer specific exercises to prepare players for the upcoming soccer competition.
Build a world-class 3D soccer stadium and welcome thousands of avid soccer fans. Customize the grass of your soccer pitch with the collectible soccer grass patterns.
Collect unique soccer jerseys and soccer team logos to showcase soccer club style, including some of the largest soccer clubs in the world.
Professional statistics of soccer match data, analysis of soccer matches and soccer team performance in different dimensions.
soccer trophies for leagues, cups, Champions League and Premier League are waiting for you to win, be a soccer manager who never leaves the field!
New and fun online soccer events will appear regularly, allowing you to conquer new soccer challenges and win awesome prizes
Manage your soccer club, compete with friends and show you are the best soccer manager in customizable leagues.
Join forces with other soccer managers to form the ultimate soccer team in the newly upgraded Weekend Clan Championship!
Chat with your soccer association teammates and get ready for the next match!
Schedule custom soccer leagues with your family, colleagues and friends anytime, anywhere for the ultimate pride capital!
Use your 3D youth school to train tomorrow’s soccer stars.
Sign contracts with soccer superstars that best fit your management strategy idea and lead them to great results

A wealth of soccer tactical options and a complete training system allow you to show off your skills! Friendly, Invitational, Master League, Tournament, come and pick up your first championship trophy!

Come join this green soccer stadium and start a new era of soccer managers with millions of players. See you at the stadium!